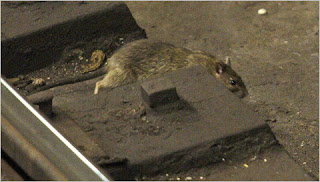 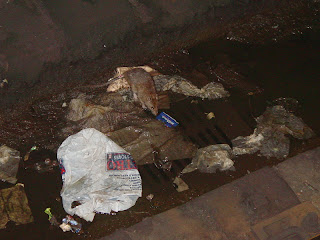 Posted by Bridget L. Murphy at 8:34 PM No comments:

After meeting Wayne Barrett in person, I must say that my preconceived notions of him were confirmed. I was under the impression that Barrett was not only a great investigative journalist, but also quite the workaholic. After hearing his compelling speech in regards to current NYC events and issues, as well as his overall opinions about the profession of journalism, I realize that Barrett has no choice but to work as hard as he does. Barrett's calling in life was to be a journalist. He doesn't look at finding the next big story and uncovering the truth as a "job." He is instead one of those few lucky people who were able to find their true calling in life, and his calling was to be a journalist and he loves every minute of it. Barrett has single handedly uncovered some of the most scandalous stories that have hit NYC. He doesn't care if people hate him, in fact, he seems to find pleasure out of knowing he is considered such a threat to some of the most powerful politicians and other various figures. His lack of concern for being "liked" is further shown when he explains how he can recall "walking into a conference room with 200 people...and they all hate you." Also, learning that he was actually arrested by Donald Trump one day after attending a birthday party was quite an enjoyable story to listen too.

Barrett is truly a journalist that aspiring journalists can really look up too. Barrett says the profession of journalism is so unique because journalists are "paid to write the truth and you can't really say that about many other professions." Not only is he 'not afraid to go there,' he is also a genuine person who anyone can relate too. He never let his fame go to his head, and he certainly doesn't seem to believe that he is better than anyone else. Barrett believes anyone has the power, especially in with the available technology today, to uncover the truth about any story. He feels investigative journalism is very much alive today and does have a future. Barrett's love for journalism is further shown through his overall character. He speaks so positively about journalism, and believes that journalism is quite a noble profession. Overall, Barrett is a wonderful public speaker and just as entertaining as he is informative. He still recognizes himself to be a proud New Yorker, and also proud of his Brooklyn roots.

Although some might find Barrett's speeches controversial, I find them eye opening. He explains himself that most of what he says, in regards to political figures and controversies, are not his opinion, but actual facts that anyone can check for themselves. If anything, people should be thankful to have a journalist like Barrett in NYC to do all the 'dirty work' for them. He makes enemies, works hard to find the truth, and then shares it will all of us. To me, that is precisely what a great journalist does. Barrett sets the standards high for journalism, as it should be. Too much of what we read today in newspapers and see on television does not provide the whole truth of a story. However, Barrett does, and he presents his facts and findings in a very clear and understandable fashion. Overall, I was very impressed with Barrett after being given the opportunity to hear him speak at Brooklyn College. I am very thankful that the lecture was made possible by Professor Ron Howell as well as the Wolfe Institute. I look forward to the next time Barrett is available to come speak at Brooklyn College, and maybe even cross paths again with him one day during my professional journey as a journalist.
Posted by Bridget L. Murphy at 4:26 PM No comments:

Since becoming a journalist student, I realize how much work actually goes into getting a great story. A good journalist must truly commit herself in order to correctly research and write a high-quality story. Being a journalist comes along with a great level of responsibility as well. It is expected that a journalist’s writing remains as objective as possible, containing accurate facts, names, and other sources. If a journalist were to slander, lie, or post inaccurate information in their story, it would directly go against what is ethically expected from them as a respected journalist. Therefore, ethics does play a significant role in a journalist’s profession and must always be taken very seriously.
Anyone can get a story if they don’t need to play by the rules. What makes a great story, and a great journalist, is learning how to get to the truth in such a fashion that no one is hurt in the process, including the journalist. Honesty is one of the most meaningful ethical principles in journalism. Remaining honest to your audience, yourself, and the people you are interviewing, is what will ultimately enable you to succeed in your career; as well as producing the best possible stories and feeling the most accomplished with yourself. This is something I feel I have accomplished thus far in my journalistic career, and will continue to always remain as honest as possible.
Since writing my feature story about Rats in New York City, I have made a conscious effort to always give whoever I am interviewing at least some background information about myself and what my intentions are for the interview. Of course depending on who I was talking to, time was limited, but in every case I at least mentioned that I am a journalism student working on a story about the amount of rats in NYC, and that my main objective was to find out whether or not our city does have a rat problem or not. From there, depending on who I was interviewing, I proceeded to ask open-ended questions that were relevant to their purpose in the piece. For example, when I interviewed a NYC Sanitation worker who was on the job and therefore limited in time, I made sure to let him know how appreciative I was for his time, and how much he was helping with my piece. He seemed to be grateful for my honesty and answered all the questions I had prepared for him. When I interviewed a casual NYC subway rider, the conversation was a lot more relaxed and less restricted on time, so it was easier to think of many relevant questions to ask.
No one likes to feel that they are being taken advantage of, or cheated in any way, regardless of whether or not they are in the story or just reading the story. Therefore, it does not make sense to me why a journalist would ever report any kind of false information. Ultimately, the journalist will be caught in their lies and completely embarrassed for their wrongdoings. It does not seem worth it to me at all. If you can’t get the information you need, try harder, or move on to the next story.

Posted by Bridget L. Murphy at 9:24 AM No comments:

The Latest News and Ideas on My In-Depth Topic

1. Video of Two Brooklyn Women Fight Over Spaghetti On The Subway

Related Article from the New York Post... even mentions that the Rats were victorious!

2. Bloomberg does NOT think NYC has a Rat Problem

By STEPHANIE TSOFLIAS pix11.com
NEW YORK (PIX11) -- Manhattan Borough President Scott Stringer wants to launch a war on rats in New York City.
Stringer made the announcement today at a press conference in Washington Heights, where he said the problem has become unbearable.
"With this rat problem reaching epic proportions that the city would cut pest control workers by close to 70 percent," said Stringer.
Former city pest workers joined Stringer at the press conference.  They said city layoffs have allowed for rats to run wild because there are not enough pesticides being put out.
The announcement comes on the same day as new YouTube video emerged of a rat running lose through a subway.  The rodent forced people to stand on subway seats before it escaped into a subway station.
People who live in Washington Heights said they can not take it either.  Rats have made their backyards home.
"When I'm walking home or if anyone is and you know a rat will quickly pass them and you know, they have just to, jump," said Stephanie Augora, a lifetime resident of Washington Heights.
But Mayor Michael Bloomberg said rats are not a problem in New York, despite a recent rise in 311 complaints about the rodents running wild.
"I think the number of rats are actually down a good percent," said Bloomberg at a separate press conference today.
Stringer wants the city to hire back pest control workers in order to begin the battle and eliminate rats in New York.

The city's Health Department has short-staffed its Pest Control team and the number of rat complaints are reportedly rising, so naturally Manhattan Borough President Scott Stringer called a press conference today to talk about the problem. Specifically he wanted the city to man up and "reclaim the honor of being a national role model for rat control." But that bit of grandstanding by the mayoral-hopeful did not sit well with the guy who is currently not-actually-living in Gracie Mansion.

"I'm hearing story after story about people walking down the street and seeing a rat," Stringer said today before calling on the city “to do the right thing and hire enough pest control workers to wipe out this infestation once and for all.” Because, as far as Stringer is concerned "You can't reduce inspectors and think you're going to reduce the number of rodents."
But Hizzoner does not agree! "The city is doing a great job as a matter of fact," Bloomberg said this afternoon of the rodent situation. "It's a question of how you look at the numbers. It is true that complaints for rats went up something like one and a half percent. It's also true that complaints for everything go up something like five, six, ten percent on 311 because more people start to use it. That doesn't mean the problem is any worse. I think the problem probably is a lot better."

And just in case you weren't clear that Bloomberg didn't like Stringer's move, he gave a little civics lesson on what he thinks the job of Mayor of New York is: "The job is not to shove as many inspectors out there costing us as much money as you can. The job is to do what the public needs and do it as efficiently as you can...Anybody can spend more money."
Posted by Bridget L. Murphy at 9:15 AM No comments: